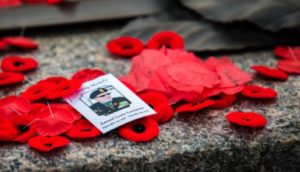 A national ceremony is held at the National War Memorial in Ottawa, where the Governor-General of Canada presides over the ceremony. It is also attended by the Prime Minister, other government officials, representatives of Veterans’ organizations, diplomatic representatives, and other dignitaries — along with Veterans as well as the general public.